France, a window to the future of European mobility 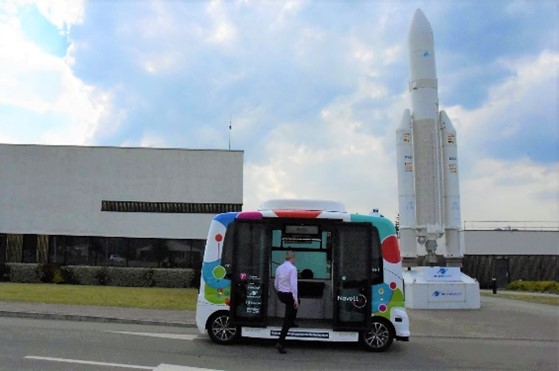 The NAVETTY pilot project is autonomous shuttle service locatedon a site representative of a real urban area. Launched in May 2021, it will switch to a service with no on-board operator in 2022.

A three-year demonstration called NAVETTY is starting on the ArianeGroup industrial French site in Les Mureaux (78), west of Paris.

The NAVETTY R&D project is supported by VEDECOM – R&D institute for energy transition in mobility-, ArianeGroup, Transdev Autonomous Transport Systems, EasyMile and the Yvelines County Council (CD78), which has strongly invested for make this project a success. The aim is to deploy a fully autonomous mobility service with no on-board operators, using electric and autonomous shuttles, on a site representative of an urban area.

The service will be distantly supervised via a supervision software from a local OCC , relying on connected road infrastructure. This step is a key and unique milestone in Europe. It will validate the technology and business model, which are critical to allow for the future deployment of a large-scale service that will start on Seine valley public roads.

NAVETTY will rely on five R&D axes. The first is the main issue of the project: after Versailles Satory’s open road experimentation with extended perception by autonomous shuttles including an on-board operator, the goal is to switch to a mode with no on-board operator and a distant supervision. The other four are: cybersecurity, operational safety of the mobility system, smart and connected infrastructures and acceptability of the ecosystem.

For this large-scale demonstrator, the choice of the ArianeGroup site in Les Mureaux west of Paris, which covers an area of 227 acres, is ideal as it brings together all the complex elements of an urban area: road and pedestrian traffic, roundabouts, intersections and parking lots. This environment lends itself perfectly to preparing future transition to an urban scale. This autonomous shuttle service has also been designed to meet the needs of ArianeGroup to improve access to its facilities.

Distant supervision: a core technology for the switch to full autonomy

A new technology has been required to implement a mobility service of autonomous vehicles both with no on-board operator and offering the required service quality and safety levels. This technology is a software called Autonomous Vehicles’ Supervision and is developed by Transdev Autonomous Transport Systems. It offers three main functions: fleet management, system monitoring and customer experience.
Within the OCC located on site, supervision operators from Transdev Ile-de-France will be present to supervise the service in real time.

Cybersecurity and the operational safety of the mobility system: prerequisites

Cybersecurity is a central focus for the research carried out in this project. The challenge is to guarantee the safety of the entire mobility system and prevent any malicious acts.
Indeed, current autonomous vehicles include on-board technologies dedicated to perception, supervision and trajectory decisions. These faculties are made possible by sensors, processing and computing units which must be totally secured for passenger transportation.

The connected and intelligent infrastructure, including roundabouts and crossroad management, is developed by VEDECOM. The project’s aim is to improve the efficiency of the shuttles while crossing a roundabout. The infrastructure will be able to analyze the activity of vehicles and users while entering and exiting the roundabout. It will also be able to transmit authorizations to the shuttles, in order to allow better management of the crossing, with fluidity and safely: authorization or prohibition to enter, proposal of an optimal trajectory.

Acceptability of the ecosystem: a key issue to validate the model

Acceptability is a key issue to maximize the success of this unprecedented autonomous mobility service. This work package, carried out by VEDECOM, will consider the opinions of end users but also players in the ecosystem whose actions may have a direct or indirect impact on the service’s progress.

Several use cases will be studied, from the ArianeGroup industrial site to train stations and the Les Mureaux Campus, within urban and suburban areas

In parallel to the R&D work, several use cases will be studied to prepare the deployment of autonomous shuttles in the Yvelines territory.

Use case 1: Fully autonomous shuttle service with no on-board operator, on an industrial site representative of an urban area.

The first use case is an autonomous shuttle transport service on the ArianeGroup site in Les Mureaux. This site specializes in project management and major civil and military space programs including the development Ariane 6.
The service will run for three years starting in 2021. The objective is to remove the on-board operator from 2022. This site’s surface area (50 buildings spread over 227 acres) and attendance (2,700 people) are comparable to those of an urban district, making it an ideal place of demonstration.

Another route will be studied and experimented during the project, for a limited time, in cooperation with the Public Transport Authority. This route will connect Les Mureaux train station to the ArianeGroup site, which is just over a mile from the station.

Use cases 3 and 4: Autonomous mobility services in urban and suburban areas.

NAVETTY, a partnership project in the French Yvelines territory, west of Paris

Yvelines territory, west of Paris, is the leading County in France for the automotive industry. The department Council has supported the VEDECOM R&D institute since its creation, through funding of €20 million for its programs dedicated to innovative mobility (including low-carbon mobility, and autonomous vehicles). Yvelines is the institute’s second public funder after the National Research Agency (ANR). With this demonstration, the Yvelines department confirms its support for the industrial redevelopment of the Grand Paris Seine & Oise area. It also strengthens its investment policy in mobility projects in the area (budget of €500 million dedicated to major public transportation projects including railways and road infrastructure). Beyond the technological aspect of the project, the Yvelines department also intends to support the blending of know-how between the space and automotive industries: ArianeGroup’s expertise in complex systems together with mobility players such as VEDECOM, Transdev Autonomous Transport Systems and EasyMile. Numerous companies in aeronautics, technology and automotive are located in the territory. Eventually, the aim is to strengthen the links between all of them. “The Yvelines is a region of innovation and the launch of this experiment reasserts our desire to develop innovative and sustainable mobility in the department. I am very glad of this new impulse between industry and research. Being at the service of the Yvelines people, the NAVETTY project will prepare for a revolution in their daily life”, said Pierre Bedier, President of the Yvelines Council.

NAVETTY responds to VEDECOM‘s ambition to develop breakthrough technologies and a transversal vision of new uses, in cooperation with major industrial players and through concrete projects for the community. It devotes more than a third of its activity to R&D on autonomous and connected vehicles and another third to vehicle electrification. It has developed an interdisciplinary expertise in vehicle automation, as can be seen with a number of first scientific steps in France and in Europe, such as the first Level 4 autonomous vehicle demonstration in Europe on an open road (7 km) in Bordeaux in 2015, or the first demonstration of autonomous on-demand services with no driver, with customer interface and remote supervision, in the border area, in Strasbourg in 2017. As a result, it actively contributes to the French Strategy on Autonomous Vehicles. In November 2020, it launched, with its partners, the first global barometer on the acceptability of autonomous vehicles. For Philippe Watteau, Chief Executive Officer, “this project supports a dual stake, both technological and social: accelerating the transition from applied research on electric and autonomous vehicles to operational implementation; provide real services to populations in remote areas where traditional transport costs are too high. VEDECOM will also fully play its role there: a role of public/private federator, and a support role for the economic development of French industries.”

Setting up of the NAVETTY project The project, led by VEDECOM, is supported and financed by four partners through a consortium agreement between VEDECOM, ArianeGroup, Transdev Autonomous Transport Systems and EasyMile. The Yvelines County is providing a major support of € 2.5 million to the project, making it the main funder.

ArianeGroup will host the experiment at Les Mureaux site, located in the Yvelines territory, to support the autonomous mobility research ecosystem, and to help answering mobility and carbon footprint issues. In addition to the first and last kilometres interconnection to train stations, the project should facilitate the smoothness of employee and visitor flows between buildings and reduce the use of individual vehicles on-site. The assessment of this pilot case will help studying a larger scale deployment at other ArianeGroup sites. “Technological innovation and environmental responsibility are at the heart of ArianeGroup’s space expertise. As the European leader in access to space, we contribute daily to improving life on Earth, and it is therefore both a source of pride and an evidence to make our site available for this experiment”, explained Hugues Emont, director of the ArianeGroup Les Mureaux site.

“This new project will allow us, together with our partners, to reach a significant new step in the development of autonomous mobility and the preparation of an efficient economic and social model. We are convinced of the central role of supervision to operate autonomous mobility services with no on-board operator, and we are proud to experience it soon on the ArianeGroup Les Mureaux site”, said Patricia Villoslada, Executive Vice-President of Transdev Autonomous Transport Systems.

With globally recognized experience in autonomous mobility solutions, EasyMile provides the shuttles necessary for the implementation of the project and the associated services. Since the very first day, EasyMile has been working to develop safe and efficient solutions to deploy autonomous Level 4 vehicles. The majority of the more than 300 deployments made by EasyMile with its EZ10 shuttle have been carried out on open roads, but local regulations around the world require the presence of a security on-board operator. Therefore, EasyMile is particularly interested in testing and improving the deployment and management of a fully driverless autonomous shuttle in a complex environment representative of an urban area. “My vision for autonomous vehicles is that autonomous public transport is coming soon. It will arrive long before driverless cars and taxis. The relative simplicity of a transit service makes it ideal for autonomous technology,” says Gilbert Gagnaire, Founder and CEO of EasyMile. “Today, with this unique project, we are taking our technology to the next level. We will be able to experience a service with no on-board operator in a realistic environment, which paves the way to new mobility solutions for future, similar applications.”