A key challenge for vehicle manufacturers and their partners is to guarantee road users a high level of safety when the latter activate the automated features of their vehicle in often complex driving conditions, or when they are being transported by autonomous, driverless vehicles or taxis. In 2015, to ensure their safety, the VEDECOM Institute went into partnership with PSA, Renault, and Valeo, to launch the MOOVE project which aims to compile a database of scenarios of real driving conditions to be used as a technical reference bank for the design and validation of delegated, automated driving features. Here is an update on this large-scale project which has sent out a fleet of nine vehicles to collect driving data that will give a precise understanding of the different driving conditions that the vehicles may encounter.

All the vehicle manufacturers agree that the only way to identify and consequently cope with the complexity and diversity of the driving conditions encountered on our roads is to collect huge quantities of data (1 million kilometres of real data has been collected at present). So, since 2016, nine vehicles have been travelling the roads of Europe as part of the MOOVE project. Their mission: to drive in all weathers and all locations to record as much data as possible on the different driving situations that a vehicle may encounter and especially to identify high-risk situations for an autonomous vehicle.

High-risk situations and driver behaviour: nothing is left to chance

The vehicles are driven by humans, and are equipped with similar perception capacities to those of autonomous vehicles: radars, lidars, and terrain reality cameras that permanently record videos in 360°. Three interior cameras observe the driver’s hands, feet and eyes, and there is a dynamic notification tablet to allow the driver to warn in real time of critical or unusual driving situations. A complete monitoring of the vehicle’s internal communication network keeps track of all the actions performed on the brake, accelerator, direction, headlights, and windscreen wipers, as well as the speed of the vehicle, gear changes, GPS position, etc. A total of 500 different signals are recorded: data which, when synchronised, allow the data scientists to reconstitute real driving situations and to know how the driver reacted to them.

After initially driving in France and the big cities of Europe, the vehicles then journeyed on motorways dual carriageways, and minor roads and in the Alps where they encountered snow and fog. They have crossed all the major bridges of Western Europe and many tunnels. They are currently driving through Eastern Europe and should soon reach urban zones and country roads. With 1 million kilometres already driven in around 15,000 hours of driving in 17 different countries, the MOOVE vehicles have already recorded 250 TB of data constituting a base of raw data on all the parameters of the driving situations encountered.

Transforming the raw database into a relational database of labelled scenarios

A hardware and software infrastructure has been set up at VEDECOM for storing, archiving and performing processing calculations on the 250 TB of data. The project partners have secure, remote access to this infrastructure.

The raw data is organised according to a structure adapted to such a large volume. For that it is subjected to a series of transformations to allow it to be analysed and to allow efficient access and calculations 100 times faster than real time: “We analyse the signals with 171 algorithms to find expert rules, identify what took place and extract all the attributes: speed, inter-distance, etc.” explains Annie Bracquemond, project manager at the VEDECOM Institute. “That will then be used by drivers and their partners to specify and validate the control systems of future autonomous vehicles.”

At the end of this process, a relational database of 5 TB of interpreted objects reconstituting driving scenarios, synchronised with the videos, has been established. 80 remarkable and pertinent scenarios have been identified. A dedicated interrogation software package for this database (MOVIN-SALSA) has been developed, based on the SALSA software developed by CEESAR (European Centre of Studies on Safety and Risk Analysis) to extract and model the desired driving scenarios.

Around a hundred High Level Parameters have also been defined to specify all the objects and players in the road driving scene. These parameters make it possible to model the entire environment of the vehicle. Each one has been strengthened by specific algorithms to make them as robust as possible. These parameters are processed by algorithms to allow the data scientists to detect events exterior to the vehicle as well as the actions of the driver, and also to reconstitute the elements of the road infrastructure or temporal sequences and climate conditions in which the scenarios take place.

The last phase of the process consists in extracting the critical sequences and producing statistics on the probability of occurrence of these events, and driver actions or reactions, while taking into account different road infrastructures and impact of weather conditions. The project comes down to modelling the real world in order to pass on this knowledge to the designers of smart perception and supervision features and using simulation to ultimately validate the control mechanisms of autonomous vehicles. Objective: maximal safety. 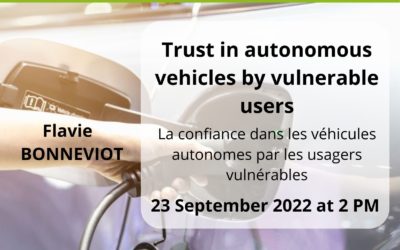